NYAMATA, Rwanda — On April 26th, 2018 the United States Agency for International Development (USAID) launched a new 28 Billion RWF project to support agricultural growth and resiliency across Rwanda. The project, called Feed the Future Rwanda Hinga Weze, will be implemented over five years in 10 districts across Rwanda.

Hinga Weze will work directly with over 200,000 farmers. The project will help them grow at least 50 percent more crops on the same amount of land by promoting sustainable use of fertilizers, improved seeds, watering practices and more. With more crops per hectare, farmers will have more money and greater food security.

Hinga Weze will also provide pest management training to help farmers combat the invasive Fall Armyworm pest. The project will also bolster the resilience of Rwanda’s agricultural sector to a changing climate. By the end of the project, over 600 new hectares of farmland will be fitted with new irrigation infrastructure.

The new USAID-funded project will also improve the nutrition of hundreds of thousands of pregnant women and young children across Rwanda, who are vulnerable to stunting. That’s because Hinga Weze will partially focus on the cultivation of highly nutritious foods, such as orange fleshed sweet potatoes and high-iron beans, and will train families and communities on preparing nutritious meals.

The project launch in Bugasera District was attended by the U.S. Ambassador to Rwanda, Peter Vrooman, the Minister of State in Charge of Agriculture, Fulgence Nsengiyumva, other Government of Rwanda representatives, agribusinesses, farmers and others.

The main guests participated in a feeding session for children together with nutrition health workers, after taking part in the symbolic revealing of the five value chains supported by Hinga Weze – maize, high-iron beans, Irish potatoes, orange-fleshed beans and horticulture. The guests later toured an exhibition of farm input and post-harvest handling equipment and bi-products displayed by agrodealers and agro-importers and other Hinga Weze partners.

In a call to action message, Ambassador Vrooman urged Hinga Weze to provide a lasting solution to farmers, highlighting fall army worm as a major threat to agriculture productivity. His words came after the main guests were guided through a demonstration on how to identify fall army worm (FAW) pest. Hinga Weze will provide pest management training to as part of the campaign to combat the invasive pest. So far Hinga Weze has already identified about 365 hectares affected by FAW in its districts of interventions. 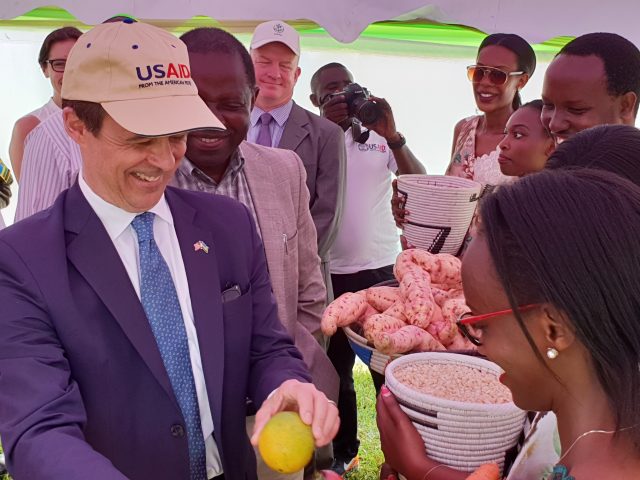 US Ambassador Vrooman and Agriculture State Minister during the display of Hinga Weze supported crops.