Access to finance is a major obstacle for rural producers who wish to invest in and strengthen their agribusinesses. Often, financial institutions consider agricultural sector financing to be highly risky and, as a result, offer few financial products to support smallholder producers.

To improve access to financing for cowpea, small ruminant and poultry value chain actors in the Centre-Nord, Est and Sahel regions of Burkina Faso, the Feed the Future-funded USAID Yidgiri activity signed a partnership protocol with the Network of Popular Credit Unions of Burkina (RCPB) in November 2020. The partnership with RCPB, which is present in each of the activity’s target regions and has many offices throughout the country, aims to build stronger relationships with producer organizations and ensure that farmers have improved access to credit.

In addition to strengthening access to finance, USAID Yidgiri collaborated with the USAID CATALYZE project’s financial facilitators to build the capacity of producers to apply for and receive funding. Together, they helped producer organizations develop and submit over 90 support plans, enabling them to negotiate their financing with the credit union network. To date, 14 cooperatives have received loans worth around $34,000 (approximately 18.75 million FCFA) to support their activities and grow their businesses. 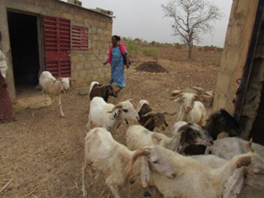 The President of the Communal Union of Small Ruminant Producers of Boulsa, Sibdou Kabore, directing the animals to the sheepfold.

The communal union of small ruminant producers of Boulsa, chaired by Sibdou Kabore, was among those that received a credit loan. The union’s 12 women producers received around $7,500 (approximately 4.9 million FCFA) to conduct small ruminant fattening activities, which enabled them to acquire 96 sheep and feed for their livestock. With their first wave of fattened animals, they sold 34 sheep to local traders and delicatessens for a total of around $4,000 (approximately 2.6 million FCFA). With their second wave of fattened animals, they were able to sell 50 fattened sheep during the Tabaski celebration for a total of around $8,000 (approximately 5.3 million FCFA). Through these sales, the women will repay their loan on time and already plan to sell a third wave of fattened sheep  during other national holidays and end of year celebrations.

Sibdou Kaboré, one of the union’s producers, described her appreciation for the activity and its support, enabling them to sustainably boost their business ventures. “Without the support of The Feed the Future-funded USAID Yidgiri activity, my cooperative could not have accessed such a large loan amount,” she said. “Thanks to the training received from USAID Yidgiri on small ruminant production techniques and the manufacture of livestock feed, we are able to carry out this lucrative activity properly.”

Increased access to finance is essential for producers like Kaboré to boost their agribusinesses and participate in key markets. By supporting initiatives that break down the barriers restricting producers, the local economy benefits—through the likes of new inputs, technology and businesses linkages—and the market system grows more resilient.