For One Woman, Amalima Training and Eco-stove Offer a New Outlook on Life

Esnath Tshuma, 45, lives in Tjompani village with her 13 year-old nephew, Tandana. Esnath is a strong-willed woman who has worked hard throughout the years, but her life irrevocably changed after sustaining a severe injury three years ago. In November of 2012, Esnath was repairing a fence in her field, when she turned and lodged her foot in the fence. She fell, twisting her leg and fracturing a bone in the process. The injury resulted in paralysis of her leg and impaired mobility of her right hand. She is now limited to walking with crutches, as well as a using a plastic yard chair in lieu of a proper wheelchair to maneuver around her compound.

Her husband travelled to South Africa to look for work in August 2015, but has not been able to find a steady source of income. She receives a bit of money from her brother who works in Bulawayo, but since her injury, she has been relying on the kindness of her neighbors and the sale of her own personal items, like used blankets and dresses, to make ends meet.

“After my injury in 2012, I felt like I couldn’t do anything and was spending a lot of time sitting around idle,” said Esnath. She explained that due to her disability, she was no longer able to perform most of her daily activities like fetching water, collecting firewood, and farming. Cooking over an open fire on the ground was a particularly uncomfortable task, but she was unwilling to give up this role.

Esnath was thrilled when in early 2014, her sister-in-law, Tshihomanana Tshuma, offered to build her a clay stove that would allow her to sit while cooking. Tshihomanana participated in an Amalima training to learn how to build an environmentally friendly, fuel-efficient ‘eco-stove.’ After learning how to work with the clay, she realized that she could easily build a platform for Esnath’s eco-stove to allow for cooking while seated. The results were perfect; not only is Esnath able to complete her daily chores with increased comfort, but due to the eco-stove’s fuel-efficiency, her young nephew saves time and energy searching for increasingly scarce firewood in the bush.

Tshihomanana learned about Amalima’s Community Health Clubs (CHC) through the eco-stove training, and asked Esnath to join her in participating. CHCs promote increased awareness of water, sanitation and hygiene (WASH) practices in communities through completion of a 20 module Participatory Health and Hygiene Education (PHHE) training. CHCs foster learning for change through promotion of practical improvements at the household level to change the behaviors of community members in favor of a more hygienic environment. In March 2014, 16 women and one man from Tjompani village established the Mukani CHC and began receiving lessons from Nosizo Dube, their neighbor and Community Based Facilitator (CBF).

“After joining the CHC, I realized that I could stand up for myself and do something with my life,” noted Esnath. The lessons highlighted vital steps to improving hygiene that Esnath was capable of completing at home, such as sweeping, washing hands at critical times, using a 2-cup water system, rubbish disposal and cleaning dishes. Perhaps more importantly, belonging to the club gave her a special comradery with her group members. The members proved to be more than just a social outlet; recognizing her needs, the group pitched in to build Esnath a tippy-tap hand washing station, a private bathing area, and a rubbish pit at her homestead.

After completing the PHHE sessions, all 17 Mukani CHC members graduated at a community-wide ceremony. After this milestone, the members recognized a positive momentum with their initiative and made the decision to continue working together as a Village Savings and Lending (VS&L) group. To make this transition, they received training on VS&L methodology from Amalima, including group formation, constitution development, group fund development, loans and loan appraisal, and record keeping.

Mukani group held its first VS&L meeting in August 2015. Their objective is to save for short-term needs such as food, kitchen utensils and school fees, as well as to pool financial resources for larger, higher-impact income generating activities. The group’s long-term goal is to establish a poultry business with their savings. At each meeting, hosted by a different member on rotation, members make a $10 contribution. Each month $10 is set aside for group savings and investment in their poultry business, which they hope to establish later this year. The remaining cash is used to provide the hosting member with kitchen utensils and a goat valued at approximately $35. The balance is then shared out evenly among members for their household use. The group has $70 saved to date. 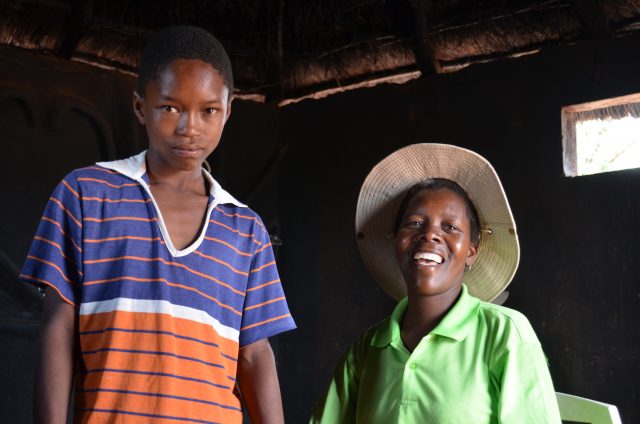 Esnath already has plans to grow her small livestock herd with the goat she received from hosting the December 2015 meeting. She is also looking forward to being involved in the poultry income generating activity to become economically self-sufficient; the group considered her accessibility when selecting where the chicken coop will be located.

After receiving her eco-stove and joining the Mukani club, Esnath recognized her ability to lead a full life. The training Esnath received from Amalima is invaluable, yet the support and friendship from her group members has been as vital to her livelihood. She is grateful for the opportunity to join the CHC. “It has given me a sense of purpose,” she says.

Amalima builds on existing communal initiatives in order to sustainably improve household food security and nutrition by strengthening access to and availability of food, community resilience to shocks, and nutrition and health among mothers and children in the districts of Tsholotsho (Matabeleland North), Bulilima, Gwanda and Mangwe (Matabeleland South). In order to achieve this objective, Amalima fosters women’s empowerment and gender equality as a cross-cutting component to the program that underpins all activities.