To remedy this, the Feed the Future-funded USAID Yidgiri activity trained producers in improved poultry production techniques and in the manufacture of poultry feed using local ingredients. As a result, two members of the Béogoboumbou producer organization (PO) in Kaya, Burkina Faso, who benefited from this training are transforming their knowledge into a source of income for themselves and their PO.

During the training, producers learned that in order to have high output, regular productivity and optimal poultry growth, it is necessary to use balanced feed composed, among other things, of proteins, essential amino acids and minerals, which are found in locally available soya, corn, fish powder and calcined bone. Rasmata Sawadogo and Mouazou Kanazoe, both members of the Béogoboumbou PO, have successfully experimented with this feeding technique as a result of the training offered by USAID Yidgiri in 2021. Sawadogo and Kanazoe admitted that their chickens used to be small since they let them roam around looking for food and sometimes threw them handfuls of millet like so many farmers in the village. “I didn’t know that feeding my chickens a special diet could accelerate their growth, optimize their weight and earn a higher selling price,” says Kanazoe. 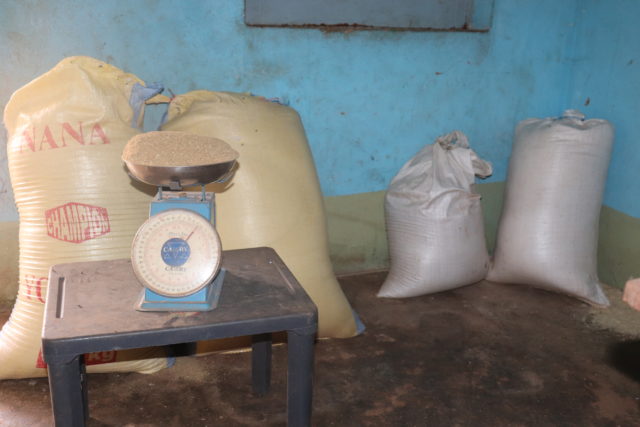 After the training and feed experiment the two conducted on their poultry, Sawadogo and Kanazoe trained the 17 members of their PO, including 6 men and 9 women, on these improved poultry production techniques. Now, in order to feed their poultry at a lower cost, the members collectively contribute money for feed production and pay for the necessary ingredients at wholesale prices.

Given the positive effect the feed had on their poultry and the frequent shortage of industrial poultry feed available on the market, the PO also decided to produce and sell their feed. Their products are sold to private individuals as well as to other POs, including Basnéré, Pissila and Kaya, who place group orders. A 50kg bag of poultry feed costs $25 (15,000 CFA) and the PO produces about one ton per month, depending on their orders. The PO puts 50% of profits earned in a fund and shares the remaining 50% with its members. The money in the fund can be borrowed by members who need a small loan to boost their activities.

Kanazoe, a 20-year-old youth member of the PO, says he likes this activity because “per month, I can earn between $16-42 (10,000 to 25,000 CFA). So far, I was able to purchase a bicycle and I am building a house of 20 sheets in the family yard. I dream of being a boss and of having a big poultry feed production company.” Sawadogo, a mother of two, adds that she earns an average of $33 (20,000 CFA) per month, which is additional income that she reinvests either in her chicken coop or on her family.

To help the PO increase its competitiveness and reduce dependence on their neighborhood mill for grinding ingredients, Lassané Kanazoé, the PO’s cluster lead, utilized his network of partners to help the PO access a nearby multi-function mill in December 2021 so that they could efficiently respond to orders. The mill has a grinding capacity of one ton per hour. The Songvensé cluster was formed under USAID Yidgiri’s predecessor, the Resilience and Economic Growth in the Sahel – Accelerated Growth (REGIS-AG) program, and continues to have members, including the Béogoboumbou PO, take advantage of the mill to produce quality feed and help sell poultry at the right time and at preferential prices. In addition, the PO intends to offer its services to nongovernmental organizations to help their partners access poultry inputs.

Through its work with the Béogoboumbou PO, USAID Yidgiri is demonstrating that with strengthened capacity building, producers can improve their resilience and generate profitable economic opportunities for themselves and their communities.