Ndebele, 65, lives in Impu village, a rural, semiarid stretch of southwestern Zimbabwe currently facing a historic drought as a result of El Niño. In many ways, Impu village is no different from the rest of the country, where 2.8 million people are estimated to be food insecure this year. However, this area is characterized by low rainfall even in a good year, not to mention particularly high levels of poverty and stunting levels over 24 percent.

USAID, through its five-year, $43 million Amalima activity, is working in Impu village and the surrounding rural areas to strengthen communities’ resilience to shocks, such as drought, by enhancing nutrition and food security, improving livelihoods and helping communities plan and prepare for disasters. Amalima is the Zimbabwean Ndebele language word for a custom where people work together to help themselves through productive activities like preparing land for farming or repairing a dam.

Confident, respected and forward-thinking, Ndebele, a grandfather to five, has taken an active role in many aspects of Amalima. As a member of the Impu village Disaster Risk Reduction (DRR) Committee, Ndebele received training from the activity to identify and define disasters common in the community and to develop an action plan to respond. And in a gender reversal for this patriarchic society, he is a “lead father,” leading peer-to-peer support groups that help mothers learn how to better feed and care for their children.

A Flea Bath for Cattle

In his role identifying potential disasters, Ndebele, along with other members of the DRR Committee, identified their top priority: the rehabilitation of a dilapidated old dip tank, which was subsequently reconstructed under the supervision of USAID technical experts. Functioning like a large flea bath for cattle, a quick swim through the dip tank protects cattle against disease-carrying ticks. Ndebele worked with 103 other members of the community to repair the dip tank, receiving $30 a month in exchange for his labor. 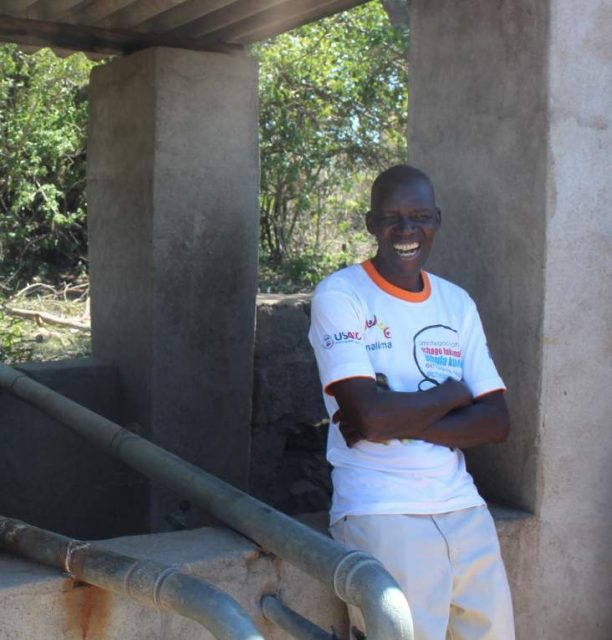 “The wages really came as a relief, as I managed to buy food for my family,” said Ndebele, who also bought a goat with his earnings, a potential income-generator for his family.

Now over 1,800 cattle belonging to 200 households can use the dip tank, preventing disease and death caused by ticks and protecting livelihoods in a place where economic stability is tenuous. Ndebele is now part of a committee that will manage use of the dip tank, ensuring it will never again fall into disrepair.

This is one of 32 facilities built or rebuilt through the project. “Not only do these construction projects build resilience against future droughts, but with compensation for the laborers, they meet the immediate needs of people in a very vulnerable situation,” said USAID/Zimbabwe Mission Director Stephanie Funk. “USAID’s Amalima activity has put much-needed cash in the hands of nearly 4,000 workers.”

In his role as lead father, Ndebele is breaking down gender barriers by volunteering to facilitate a care group, which is usually run by a woman. In addition to promoting better nutrition for small children, these groups provide a forum for group discussion on the challenges women face in their communities. Amalima has more than 24,000 care group participants led by 1,700 lead mothers. Ndebele, however, is one of only three lead fathers.

He meets with the 10 members of his care group once a month on the dusty ground under a large, shady tree. There they share key health and nutrition messages. He also treks to each of their homes to provide individual mentorship, assess adoption of behaviors and speak with influential family members, such as grandmothers or husbands. Ndebele encourages husbands to provide support in household and childcare activities in an effort to improve the family’s nutrition and food security.

In rural Zimbabwe, women are responsible for household chores and childcare activities, as well as the most time- and labor-intensive agricultural tasks. Impu village and its neighboring communities adhere to a predominantly patriarchal culture that affords limited rights to women and where men are reluctant to take part in duties perceived as womanly.

When Ndebele first started as a lead father, he says, “Men used to laugh behind my back. But they stopped once they needed my help.” By teaching improved infant and young child feeding practices through his care group meetings, his peers now understand he is helping families raise strong, intelligent boys and girls that will better contribute to their household and community’s prosperity.

Ndebele strongly believes that health and nutrition are issues relevant to the entire community and should not be ignored by men. Still, it is the women who are encouraged by the lead father’s advice and wisdom.

Care group member Silvia Moyo learned about the important nutritional benefits of breastfeeding. With Ndebele’s encouragement, Moyo relayed that information to her husband and talked to him about the challenge of making time for breastfeeding when she has so many household duties.

Moyo and her husband together formed a solution that works for their family. “I am very determined to breastfeed my son so that he grows up intelligent and takes care of me when I’m old,” said Moyo. “I’m very happy with the support my husband will be giving me. We will help each other in the household and also use an eco-stove to save time.”

Ndebele’s pioneering role as a lead father is raising awareness of the benefits of male involvement in childcare activities and setting an example for young boys. “Men come to me and ask questions about nutrition, health and their children’s porridge,” he said.

Already the project is seeing positive results. According to preliminary data, the proportion of infants under 6 months who are exclusively breast fed is now 84 percent, up from 45 percent at the start of the activity.

Ndebele believes he and his village are at the forefront of improving their food and nutrition security, and building resilience to natural disasters. “It has built in us a sense of togetherness and helped us realize that, as a group, we can achieve many things,” he said.