Farmers get better yields and generate income from terraced land in seven districts.

Nyabihu district is renowned for its scenic hills and steep terrain, with an elevation estimated at 2,445 meters above sea level. However, for farmers like Seraphine Nyirarubanza, a resident of Rurembo sector, it is a daunting task to cultivate on the steep slopes. 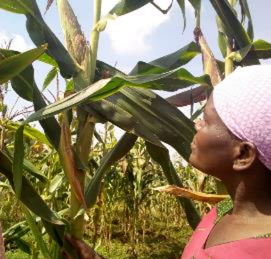 In this region of Rwanda, crops and fertile topsoil are frequently washed downhill by rain, causing reduced soil fertility and a decline in crop productivity.  To support over 5,620 farmers growing crops across this region, including Nyirarubanza and the members of her cooperative, the Feed the Future Rwanda Hinga Weze activity constructed and rehabilitated approximately 818.85 ha of radical and progressive terraces. Funded by USAID and implemented by Cultivating New Frontiers in Agriculture (CNFA), Hinga Weze aims to sustainably improve agricultural productivity, increase smallholder farmers’ incomes and improve nutritional status of women and children.

Together, Nyirarubanza and 164 other cooperative members offered their paid labor to construct the terraces, a task that involved setting up a drainage system around the plots by establishing cut-off drains, waterways and dams. The cooperative also planted grasses, such as French Cameroun, to protect the drainage systems and embankments.

As part of Hinga Weze’s integration model, the planted grass was also used as livestock feed, with the residue turned into manure and added to artificial fertilizers to improve soil fertility. Additionally, producers were encouraged to re-use topsoil removed during the terrace development phase, to add in three tons of lime per ha every three years to cultivate healthy soil and to add 10 to 30 tons of organic manure per ha per season to reduce soil acidity and improve fertility.

Many farmers quickly reaped the fruits of their labor. For example, at the Muhanda site in the Ngororero district, farmers planted Irish potatoes on 40 ha and increased their yield four-fold from five tons to 21 tons per ha, worth approximately $167,000 (173,677,500 RWF).

Nyirarubanza’s hard work also proved beneficial. “I used to harvest only 200 kgs on my 20-acre plot,” she said. “But after learning to terrace and apply fertilizers and manure, I am now able to harvest 400 kg.”

With the completion of progressive and radical terraces, farmers like Nyirarubanza are assured of improved yields and higher quality crops of maize, high-iron beans, orange-fleshed sweet potatoes, Irish potatoes and various other horticultural produce, some of the key commodities in the region. These yields also translate to higher income generation and improved food security.