Support for Agrodealers improves business and access to farm input

Agrodealers are an essential part of the agricultural value chain system, but their business can be lucrative or daunting depending on which side of the coin you flip. Pacifique Uwayisaba, and mother of two, has experienced the downside of this. She has been an agrodealer in Ngororero District for the last 9 years since 2009, and her business first registered growth, but later slowed down, making losses due to low profits and delays in the delivery of goods.

“I had to close 20 out of my 25 outlets to cut on losses and stay afloat. I used to stock 2,500 tons per year, now this has shrunk to 700 tons,” she explained. Her woes resulted from operating in a disorganized business environment with no clear guidelines to follow.

The introduction of (APTC), Agro Processing Trust Corporation, as a one distribution agency also meant that the 100Rwf per kilogram that agrodealers gained had to reduce to 30 Rwf. The arrangement also had other side-effects. Agrodealers in a particular locality were required to wait for others to place their orders, making some run out of stock and fail to deliver on time what smallholder farmer what to buy in time for a particular season. 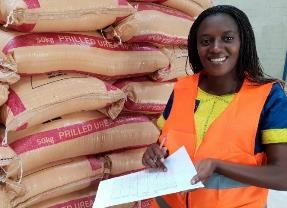 “My clients would find when I have run out of stock while waiting for other agrodealers to make their order to have a single delivery. This was hurting my business and I lost many clients to my rivals,” Uwayisaba observed.

Not out of options, Uwayisaba joined agrodealers being organized by Hinga Weze in ten districts of Gatsibo, Bugesera, Rutsiro, Nyabihu, Karongi, Nyamasheke, Nyamagabe, Kayonza, Ngoma, and Ngororero. With funding from USAID and Feed the Future, Hinga Weze is mobilizing Agro-Dealers to provide affordable and easily accessible inputs as one of the mechanisms to sustainably increase smallholder farmers’ income and increase the resilience of Rwanda’s agricultural and food to a changing climate.

The first step for Hinga Weze was to arrange for agrodealers to get certified. Uwayisaba has been sensitized on the 2012 Organic Law governing agrochemicals as well as the Ministerial Order of 2016 regulating agrochemicals and is now sensitizing others. So far Hinga Weze has assisted 212 agrodealers to comply with the agrochemical law out of 240 Agro-Dealers that operating in the 10 districts. Uwayisaba is among the 7 agrodealers already certificated in April 2018 by the regulating body RALIS (Rwanda Agriculture Livestock Inspection and Certification Services).

To improve on profit margin, Hinga Weze carried out an assessment on the fertilizer subsidies and pricing impact that established losses agrodealers incur in business. Lobbying on their behalf, profits on agro inputs have been revised, increasing the profit margin by 10Rwf per kg from 30Rwf francs to 40Rwf.  This includes 2Rwf for the farmer promoter.

“1 felt empowered when I was given the certificate, and this new profit margin means I can increase my annual stock up again to 1,000 tons,” observed Uwayisaba.

Hinga Weze is mobilizing agrodealers to form cooperatives, building on 30 already registered countrywide. As head of agrodealers in Ngororero, Uwayisaba is borrowing a leaf from Nyamagabe Agro-Dealers’ cooperative that now has distribution rights around the district. Her group is now requesting to have the same distribution rights, thereby increasing the profit margin by 3Rwf per kg allocated as distribution fee.  The sky is the limit for this enterprising woman.

“1 felt empowered when I was given the certificate, and this new profit margin means I can increase my annual stock up again to 1,000 tons.”