Five years ago, Hajira Beyene, and her family of 12 became beneficiaries of the Ethiopian government’s safety net program – an initiative that supports the poorest of the poor in food insecure districts of the country to help them meet their basic needs and become self-sufficient – in the Southern Nations, Nationalities, and Peoples’ Region (SNNPR). For 38-year-old Hajira, who is the head of her family, the 750 birr she received a month from the safety net program, along with food rations, was helpful, but far from enough.

Hajira knew she had to take matters into her own hands to ensure that her family would survive and escape poverty. She decided to start rearing and selling goats, by using one female goat that she received from a charitable organization known as Goal, and selling seasonal vegetables, which she planted in her yard when the rains allowed. Despite her efforts, lack of technical and business skills hamstrung Hajira’s efforts and left her without fair return, keeping her family reliant on the safety net program.

Hajira is one of the 63 women from the Amhara, SNNP and Tigray regions who received a four-month training on business management and leadership skills organized by USAID’s Agricultural Growth Program-Livestock Market Development (AGP-LMD) project from February to May 2015. The training taught the women how to become successful business operators by offering training in resource management, as well as improving their participation in the leadership and decision-making process of their businesses.

“The knowledge I gained from the training has entered my bones, not just my head,” Hajira siad.

The training has given her the confidence to take immediate action in purchasing one more goat for rearing by better managing some cash she had. “I purchased a new goat for 650 birr. She is expecting and will be giving birth in two months’ time, and the twin from the old goat will be ready for sale in a few months. Unlike before, I plan to sell them at a better price, and save the income from one of the goats’ sales, so that I can plan to build a better barn for the expansion,” said Hajira who mentioned lack of capital, as her main challenge.
According to Hajira before the training she never considered borrowing from the savings and credit association in her village for fear of not being able to pay back the money “Every 15 days, I contribute five birr to the association. If I borrow money, I need to pay it back within three months together with the interest based on the borrowed amount. My fear of doing so was always based on not having the source to pay back,” explained Hajira, who thinks that the training has now given her the self-confidence to overcome this difficulty as she will practice better financial management thanks to the knowledge she gained from the training.

As the safety net program of the government is set to terminate this year with a probability of being replaced with a different program, this training by USAID is a timely contribution to support Hajira’s transformation, and that of other women, into self-reliance. “There was a time when my first born had to drop out of school after he reached the ninth grade, because I couldn’t put him a school uniform. Although he is a year behind his class mates, I was able to work hard and send him back to school,” Hajira, who herself dropped out of school from the sixth grade as a result of unwanted marriage, said. She is firm in wanting to invest more in her children’s education, including her nine-year-old grandchild who is in the first grade, and whom she supports after he lost both of his parents at an early age. 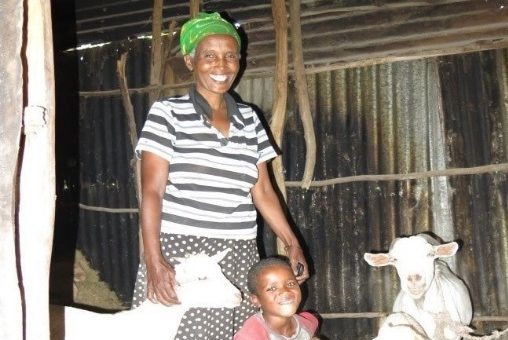 Hajira and her 9 year old grandson, Tomas, with the goats that she purchased after she started attending USAID’s AGP-LMD project provided training.