Rahila Ali, a 35-year-old mother of five, has been a participant of the Feed the Future-funded USAID Yalwa Activity since 2019. A resident of the village of Kotaré in the Maradi region of Niger, Mrs. Ali took an interest in initiating income generating activities (IGAs) to support her community and help generate income for her family after her second pregnancy. In addition to her IGAs, Mrs. Ali has often volunteered to support projects in her locality. According to the chief of her village, “her patience and her developed interpersonal skills made her the ideal choice to support activities in our locality.” She has so far been an instructor for youth learning machine sewing and manual knitting, and a facilitator in awareness activities on sexual health for girls in her community. 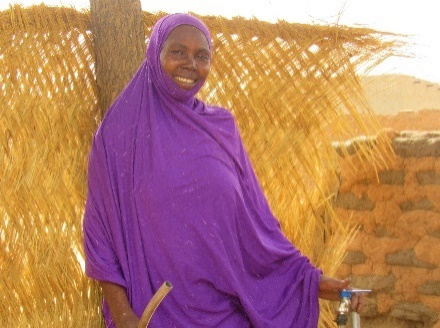 Mrs. Ali, a participant of USAID Yalwa’s Women’s Self-Development and Empowerment training. Mrs. Ali has turned several of her volunteer activities into income-generating activities to further support herself and her family.

Mrs. Ali’s first IGA focused on weaving and selling children’s hats and outfits. She later invested in small ruminant breeding with one goat that she was able to buy with her savings. Benefiting from the diversity of her interventions with her peers, whose trust she had gained, Mrs. Ali invited her colleagues to set up a tontine- loan plan to support members and fund their initiatives. Mrs. Ali also helped create a cooperative with about 40 members, primarily women, called MISECO. The cooperative received training on millet, cowpea, sorghum and peanut production techniques and was provided seeds for cultivation. They produced crops for three years and participated in group sales, including to institutions such as the World Food Programme.

Mrs. Ali also participated in USAID Yalwa’s Women’s Self-Development and Empowerment training which allowed her to grow, share her experience and skills in farming and develop a personal action plan to strengthen her IGAs and increase her income. Mrs. Ali initially expanded her sheep and goat rearing activity, using the “Habanayé” model, where she rotated three goats to other women so that they could collect the kids. In this model, the first lamb is for the beneficiary women, and the second is reserved for Mrs. Ali, allowing the women to build up their herd while Mrs. Ali expands her own. She then invested in purchasing a grain mill which generated about $3 (2,000 FCFA) per day. The income from the activities developed with support from USAID Yalwa also allowed Mrs. Ali to strengthen her economic autonomy by diversifying her investments, such as developing her women and children’s clothing and accessory business with $72 (45,000 FCFA) of start-up capital, which she was able to increase to $643 (400,000 FCFA).

The profits from Mrs. Ali’s business also enabled her to buy a piece of land for $1,124 (700,000 FCFA) and to build a store with permanent materials for her goods for $1,044 (650,000 FCFA). Additionally, she highlighted that her IGAs helped her with “more ease to provide for the needs of my family, my parents and my community.” Indeed, Mrs. Ali recently financed the reconstruction of her father’s house with her funds and constructed a drinking water point that she made available to the neighboring women. Now, the women can get water for free, while Mrs. Ali collects used water and the bran from cereals and peanuts to feed her sheep—a sustainable solution for her business and for her community.