Bugesera, Karongi, Nyabihu and Ngororero districts are among the hardest-hit areas of the deadly Fall Army Worm (FAW) pest attacking maize. FAW is an invasive pest that can cause significant yield losses if not well managed. It can reproduce multiple times each year and the moth can fly up to 100 km per night. However, the pest can be controlled through use of appropriate pesticides and early detection. 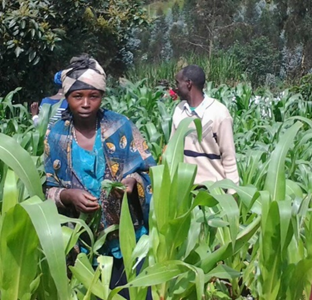 Over 760 hectares have been the most impacted by FAW across three districts of Bugesera, Ngororero, Nyabihu and Karongi and farmers are feeling the effects. FAW is expected to wreak havoc if farmers don’t aren’t prepared to combat it in time. Farmers need the knowledge about the early warnings of the pest markings before it multiplies. Last year alone, 2017 FAW infested an estimated 17,521ha of maize out of over 60,000 ha in season 2018 B. Farmers were thus more than alarmed about the potential losses to their crops.

To respond to this challenge, USAID through its Feed the Future Rwanda Hinga Weze Activity, which aims to sustainably improve agricultural productivity, increase smallholder farmers’ income and nutritional status, rapidly moved to work with stakeholders on the ground and farmers to combat FAW to reduce its destruction of yields particularly for maize in season B 2018.

Hinga Weze worked hard to build the capacity of key players to fight FAW through trainings on Integrated Pest Management (IPM) delivered through Farmer Field Schools and Farmer Promoters reaching over 29,000 farmers. One of these farmers, Musabimana Pilipila, 35, is a smallholder farmer in Sangati Cell, Nyabivumu Sector in Karongi District. She was among those hit-hard by the FAW. She expected the yield from her 0.4 ha to benefit her family of four children. However, FAW attacked her plantations of maize. As a participant of Hinga Weze, Pilipila has been able to access pesticides and acquire new knowledge on effective pesticide application through a local agrodealer. Her prospects seem promising as she explained that ‘’I have been able to fight FAW massively through support by accessing appropriate pesticides and modern spraying equipment, thanks to Hinga Weze staff who have been with me throughout the process’’ she says

Hinga Weze bought and distributed spraying and protective equipment (pumps and protection equipment) to all 10 districts’ intervention areas and Hinga Weze district staff continue to train farmers on how to use safe pesticides to combat FAW. Also, Hinga Weze has linked hundreds of farmers with agro-dealers for access to the pesticides of their choice. So far, 245 agro-dealers are working with Hinga Weze to provide modern affordable spraying equipment and better seeds to farmers across the 10 target districts.

Since maize is a staple food for Rwandans, Hinga Weze district staff have been supporting farmers together with district stakeholders in targeted districts to fight FAW infestation. ‘’On many occasions I am personally involved picking FAW with farmers to demonstrate the urgency of intervention to fight FAW on time’’ says the Hinga Weze agronomist of Karongi district.