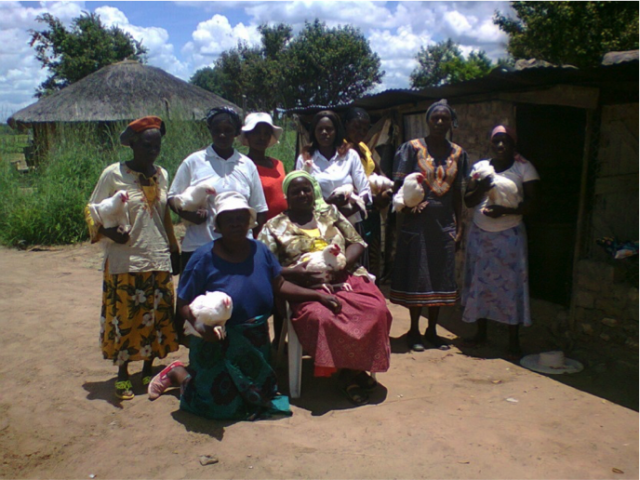 The Tsholotsho district is located in Matabeleland North in western Zimbabwe. The area experiences erratic rainfall, suffering from both droughts and flash floods, which make agricultural production in this area difficult and risky. Food insecurity is a major issue and many families rely on support from NGOs just to meet their minimum household dietary needs and struggle to cover additional household expenses such as school fees and clothing. Tsholotsho has some of the highest rates of food insecurity and stunting in the country.

However, one group of women in the Tsholotsho district is working to take charge of their financial future by establishing a Village Savings and Lending (VS&L) group with support from the USAID-funded Amalima program. The Asibambaneni VS&L group was formed in February 2014 following a community mobilization process and VS&L training by Amalima. Prior to the training, informal savings activities were taking place in the community, but they were not well organized and were used for regular household expenses such as buying groceries on a rotational basis rather than saving for longer-term goals. The Asibambaneni group now has ten members who each paid $2 to join the group and save $5 each per week. By January 2015 the group saved over $850 in cash and owns 100 chickens, which they fatten and sell for $8 each!

Amalima trains, establishes and strengthens VS&L groups as one strategy to promote investment in income generating initiatives at the community level. Following the hyperinflation in Zimbabwe in recent years, with inflation rates reaching 231,000,000 percent in 2008, the banking industry in the country remains ineffective and is not accessible or trusted by smallholder farmers. VS&L groups provide an alternative to formal banks and empower communities to invest in themselves. In Tsholotsho district, Amalima provided a cascading training in the VS&L group formation and governance. Based on this training, the Asibambaneni group formed and began saving on a regular basis and lending money to group members at an agreed upon interest rate to grow their savings. They established a constitution and continued to strengthen as a group with support from the Amalima program. 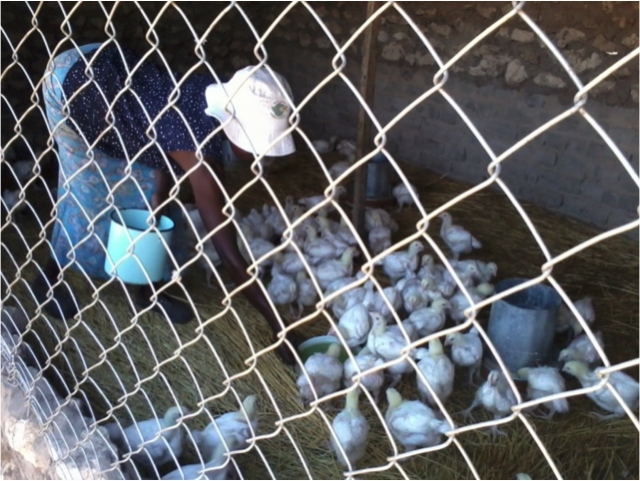 Broilers ready for the market, where they sell for $8 each.

The Asibambaneni group was then selected to participate in a Selection, Planning, and Management (SPM) training where they worked with Amalima staff to prioritize income generating opportunities and learned how to use their savings to invest as a group to earn more income from their savings. The group selected poultry production for investment and used their savings to buy 50 broiler chickens to fatten and sell. The group continued to make monthly contributions to buy feed for the chickens and was able to sell the fattened chickens eight weeks later for a profit, which they reinvested into their business. Demand for the chickens has been very high and the group has now expanded to two chicken runs and 100 chickens per batch. The Asibambaneni group is now raising their fifth batch of chickens and considering further expansion.

Based on the success of their income generating project, the Asibambaneni VS&L group is now planning to work together in other Amalima interventions, such as conservation agriculture, in an effort to increase food security. Before receiving training and forming a VS&L group, all of the group members struggled to provide for even the most basic needs for their families, but now, as one group member put it, they are a “vibrant and self-empowered group”. They are all able to pay their family expenses and improve their standard of living. The group chairperson expressed hope for the future and says that the group is continuing to develop additional income generation ideas to enable them to diversify their income source and protect against future shocks.

Amalima builds on existing communal initiatives in order to sustainably improve household food security and nutrition by strengthening access to and availability of food, community resilience to shocks, and nutrition and health among mothers and children in the districts of Tsholotsho (Matabeleland North), Bulilima, Gwanda and Mangwe (Matabeleland South). In order to achieve this objective, Amalima fosters women’s empowerment and gender equality as a cross-cutting component to the program that underpins all activities.