VS&L Group Builds Resilience for their Families and Communities

In February 2017, tropical cyclone Dineo destroyed community assets throughout Western Zimbabwe, including communities in certain wards of Tsholotsho District. The heavy winds and precipitation resulted in heavy flooding, especially around river banks, that damaged buildings and fields and created streams and gullies. Some community members’ households were so thoroughly damaged that they had to be temporarily relocated to Sipepa Rural Hospital and Sipepa Primarily and Secondary Schools. Community members also reported losing their property, livestock, and personal documents (national identification card and health cards). The Amalima program works with Village Saving and Lending (VS&L) groups, like the women of Thembisa VS&L Group, to improve access to savings, especially for women, to build community resilience to shocks. Through assistance from the USAID-funded Amalima program, members of Thembisa VS&L group have been able to raise funds to construct flood proof housing to better protect themselves against future flooding.

The Thembisa VS&L group is a 10 member, all female group which has used VS&L group funds to invest in floodproof housing. The group originally formed in 2009 as a savings and lending group to address a challenge faced by many communities’ members – poor access to funds for important household expenses. The group started out by having each member contribute $10 USD monthly. Members could then borrow from the group fund when an expense came up which exceeded the amount they had available, like school fees, medical costs, or funeral expenses. Then in 2015, the group received training from Amalima on the VS&L model and learned to not just contribute monthly to a group fund, but also to provide loans with interest to further increase their group fund.

In 2016, the group joined a disaster risk reduction training. By being based in a lower lying area and near the banks of the Manzamnyama River, their ward is located in a flood prone area. While the most recent flood was in 2017, there have also been reports of heavy floods in 1978, 2001, and 2013. Amalima’s disaster risk reduction training is focused on hazard identification, mapping, ranking and coming up with mitigation measures, and the plan to implement the various activities. After completing the training, community members create plans to prioritize what work needs to be done by the community to reduce the risk of disasters. These activities include constructing fire guards; removing harmful invasive plants like Lantana Camara and Opuntia; and rehabilitating dams by de-silting, clearing the dam wall of vegetation, and protecting the catchment area.

After receiving the DRR training, Thembisa VS&L group saw the challenges faced by community members when the 2017 floods hit. While no members of the VS&L had their home destroyed, their property was still hurt and several of their neighbors’ homes were destroyed. In response, the group decided to use their group savings towards supplying each member with a reinforced home to protect against future floods. Using funds raised through their group income generating project and VS&L fundraisers, each member is provided a pre-selected set of materials and labor valued at $1,105, as listed below:

To date, six members have received the full package of materials and labor. Four members are still outstanding, however the group aims to raise the rest of the funds needed to supply the outstanding members by the end of January. Without the funds generated through their Amalima-supported VS&L activities, the members say they would not have had the funds to build these disaster resistant homes.

VS&L Group Builds Resilience for their Families and Communities 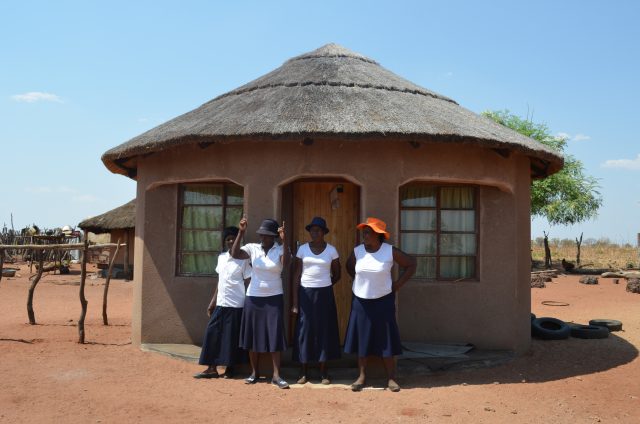