Healthy Soil for a Better Harvest – Conservation Farming in Tsholotsho

The majority of farmers in the Matabeleland region of Zimbabwe rely on rains for their agricultural activities. When rains are poor or erratic, crops fail, harvests suffer and people don’t have enough food to eat. Tsholotsho district in Matabeleland North is no exception. This area is characterized by low, unpredictable rainfall during the farming season and year-round arid conditions. Farmers are often forced to rely on alternative coping strategies, including remittances, paid casual labor and craft-making, to make it through the lean season. However, cultivation methods based on low-till conservation agriculture (CA) promoted by the USAID-funded Amalima program are improving harvest yields in this dry environment and influencing many households in the process. 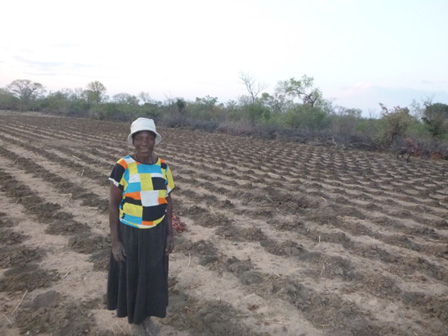 Cecilia Ncube, 66 years old, is a smallholder farmer in Zenzeleni village of Tsholotsho. She is a widower and lives with her three daughters and five small grandchildren. Several of her children are in South Africa and send back remittances on a monthly basis, which, combined with income from basket-making, is how Cecelia survives. Concerned about her family’s precarious livelihood and food security situation, she decided to participate in the Amalima program’s CA training. “I am so excited that I am taking part in this conservation farming intervention. Before the Amalima program arrived, I would use draught power to till most of my land. I would have to wait for other villagers to finish ploughing their fields before they would let me borrow their oxen. I realized that every time I was ploughing too late, well after the planting rains had gone, and more importantly, this method made the soils quickly dry off,” says Cecilia.

Amalima builds on existing communal initiatives in order to improve household food security and nutrition status through initiatives like conservation agriculture and livestock trainings, improving access to agricultural inputs and strengthening community resilience to economic and climatic shocks. The Amalima program draws its name from the Ndebele word for the social contract by which families come together to help each other engage in productive activities such as land cultivation, livestock tending, and asset building.

“At first I thought this process was too labor intensive and I didn’t see how I would be able to till a reasonable piece of land. But our mentors, Amalima field staff and AGRITEX [GoZ Agricultural Extension] Officers encouraged us to work in groups of ten so that we could assist each other with land preparation. Working this way, we were then able to work on one plot a day,” she explained. Cecelia is now part of a conservation farming group made up of 10 women in her village who also participated in the Amalima training. Soils around Zenzeleni village are sandy and the group had to collect cow dung around the nearest watering borehole to place in their planting basins to enhance soil fertility and reduce the loss of soil nutrients from water run-off. According to Cecelia’s group’s constitution, members provide assistance preparing 0.5 hectare of each members’ field using CA techniques. As a result of this cooperation, Cecelia managed to complete the millet planting on her plot before the first rains in the 2014/2015 season and was excited to compare the results of her CA and conventional plots.

In January 2015, Cecelia explained, “With good rains this year, I am expecting to harvest 300kgs of millet on this 50m by 50m (0.3 ha) piece of land. On the same piece of land I used to get around 150kgs of millet using conventional farming.” A few months later, the sorghum in her CA plot was a lush green in comparison to the crops in her conventional plot. Cecilia lamented that if she had known that the millet in the CA plot would do so much better than in the conventional farming plot, she would have dug CA planting basins throughout her fields herself.

At left, Cecilia with her lush CA millet plot in January of 2015. Right, she stands with her conventional farming millet plot on the same day.

The 2014/2015 season did not bring good rains – rainfall was 40 percent below normal in Tsholotsho – but Cecelia’s small CA plot yielded 200kgs of millet despite the drought, which is more than double the yield of neighbors who used conventional methods on the same sized land. On her 1.7 ha conventional farming plot, Cecelia yielded 650kgs, which is only 3.5 times the yield on an area of land almost six-times larger. Six months since her harvest, Cecelia still has 100kg of millet available for her family’s consumption.

After witnessing the increased yields from Cecelia and her fellow group members’ CA plots, many new farmers from Zenzeleni village eagerly participated in CA training in July and August, and formed several new CA farmer groups for the upcoming growing season. Cecilia’s CA farming group plans to expand their area of cultivation in the future using draught power and mechanized CA to prepare planting basins.

Cecelia is using CA techniques on her entire 2 hectare plot this year, explaining, “Since adopting CA, my yield was better even during a poor and erratic rainy season. CA is the best technology that I urge all community farmers to adopt. It has come as a revelation in addressing the challenge of food security both at household and community level especially for us households without any means of earning an income to feed the family.” As of early October, Cecelia had already prepared 75 percent of her plot using CA techniques.