Through the USAID-supported maize-cob model, farmers have tripled their profits and are able to engage in profitable agribusiness development.

Typically, post-harvest handling processes for maize farmers in Rwanda are lengthy and done without adequate infrastructure. These inefficient post-harvest practices can lead to increased damage and post-harvest losses, particularly because of the presence of aflatoxins—a naturally occurring soil-borne fungus that contaminates many staple foods, especially maize and other cereals.

Aflatoxin contamination of foodstuffs is not only an issue in Rwanda. It impacts hundreds of millions of farmers across Sub-Saharan Africa, according to a recent study by the International Institute of Tropical Agriculture and funded by USAID. Although farmers in Rwanda have not been spared its devastating effects, collaborations with private sector stakeholders are now reaping a positive impact for farmers.

In Ngoma district, the Duteze Imbere Igihingwa cy’Ibigori (KODUIBI) cooperative is working to transform the lives of its 102 members, the majority of whom are women, by introducing post-harvest innovations that increase maize quality and improve production efficiency. Through their partnership with the Feed the Future Rwanda Hinga Weze activity, KODUIBI was introduced to the maize-cob model from Kumwe Harvest Ltd., which reduces the time needed to aggregate, thresh and dry grains for market. Since 2020, Kumwe has supported smallholder maize farmers across 10 Rwandan districts by providing access to more consistent, efficient and better-quality harvests. 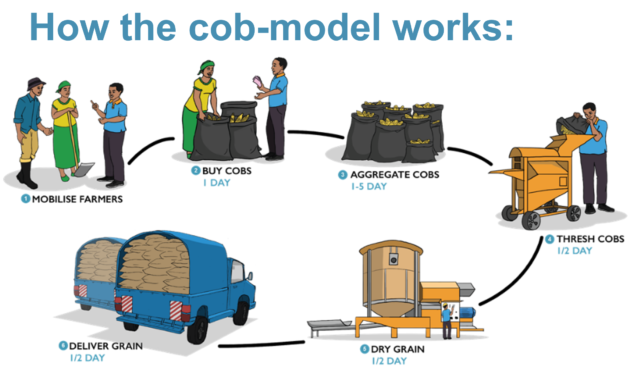 The maize-cob model itself could not have been successful without the preliminary post-harvest practices implemented by farmers such as gusharika  (drying in the sun). During gusharika, harvested maize is tied up and placed face-down in a row with the dry leaves shielding the cob away from water. Maize is then placed in shelters which reduces contamination to manageable levels, usually reaching required moisture content by buyers at 13.5-16 percent, which traditionally took about 10 weeks. The maize cob model borrows from this tradition, reducing drying time to 3-8 days, greatly benefitting farmers and enabling them to supply high quality maize to local agribusinesses.

The Kumwe maize-cob model was developed with support from Hinga Weze, a USAID project that aims to sustainably increase smallholder farmer incomes, improve the nutritional status of Rwandan women and children and increase the resilience of agriculture and food systems to the changing climate. Hinga Weze also links farmers to maize market premium buyers like AIF, who signed a contract with KODUIBI in Season 2019 A to deliver high quality, Grade 1 maize with a low presence of aflatoxins. In total, KODUIBI sold 300 MT of their maize compared to 14 MT sold during the previous matching season.

‘’For the first time our cooperative members were able to save and buy small animals to improve family nutrition and diversify foods at household level and get other sources of income” stated Epiphanie Murerwa, KODUIBI president.

Hinga Weze also works with financial institutions to develop client-friendly products that strengthen the post-harvest handing supply chain. For the upcoming season, 2019 C, Hinga helped Kumwe secure a financing service loan of $100,000 (1 billion RWF) from KCB bank to purchase professional grade drying and processing machinery and to increase the amount of maize purchased from farmers. As a result of their support to post-harvest handling, farmers have been able to improve their products’ value, nutrition and productivity.