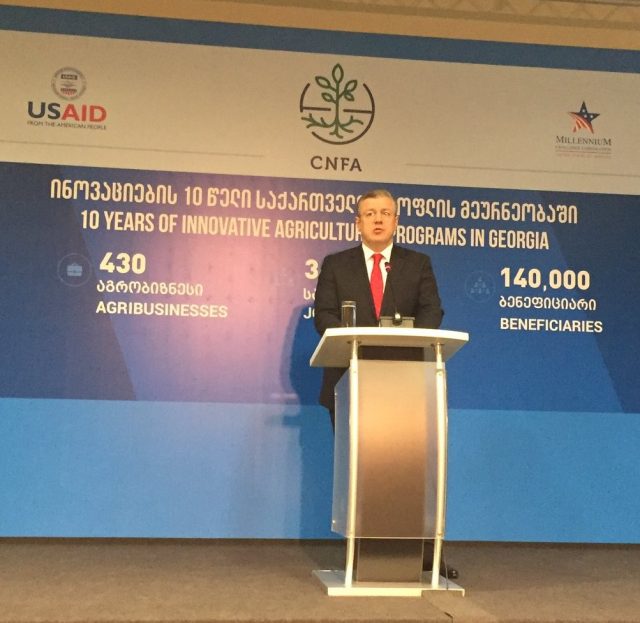 TBILISI, Georgia — Cultivating New Frontiers in Agriculture (CNFA), an international agricultural development organization, celebrated its 10 year anniversary of designing and implementing market-driven agricultural and agribusiness development initiatives in Georgia by hosting a Conference and Grantee Fair today at Expo Georgia. The event featured remarks from Prime Minister of Georgia Giorgi Kvirikashvili, U.S. Agency for International Development (USAID)/Georgia Acting Mission Director Thomas Morris, CNFA President & CEO and CNFA Board of Director Sylvain Roy, CNFA Board of Director and former U.S. Secretary of Agriculture A. Michael Espy, CNFA Board of Director and former Georgian Minister of Agriculture Davit Kirvalidze and CNFA Board of Director and CNFA Europe Board Chairman John H. Costello. The conference concluded with a presentation by Darejan Kanteladze, owner of a dairy processing plant, Santa LtD, who highlighted significant achievements that the company has accomplished as a result of working with USAID, the Millennium Challenge Corporation (MCC) and CNFA over the past eight years.

The fair featured almost 20 grantees that are currently receiving support and technical assistance from the USAID Restoring Efficiency to Agriculture Production (REAP) project, a current CNFA-led program. REAP is increasing income and employment in rural areas by delivering investment and technical assistance to expand the operation of existing smallholder farmers and rural enterprises. Conference attendees were able to sample grantees’ products and learn more about their business.

Since 2006, CNFA has led or been involved with eight projects, three of which are currently ongoing. These projects, as a result of U.S. Government assistance through USAID and MCC and in partnership with the Government of Georgia, have supported more than 430 agro-businesses, created over 3,500 jobs, generated $51 million in new gross sales, and trained more than 140,000 individuals. “We are extremely fortunate that CNFA continues to work in Georgia and the reason behind this is simple: our local Georgian staff,” said CNFA President and CEO Sylvain Roy. “None of this would be possible without their hard work and dedication, some of who have been with us since our first project. It is because of our people’s commitment and passion that CNFA has been able to truly make a positive impact in such an incredible country.”

The conference and grantee fair was the last event of a six-day visit to Georgia for seven CNFA Board of Directors to experience firsthand some of the work being currently implemented and to see the historical impacts under CNFA-supported projects. Other members in the CNFA Board of Directors delegation included Akin Gump Strauss Hauer & Feld LLP Senior Policy Advisor Devry Boughner Vorwerk, Elin Miller Consulting, LLC Principal Elin Miller and former Archer Daniels Midland Company Senior Vice President Richard P. Reising.

CNFA: Cultivating New Frontiers in Agriculture, an international development organization, specializes in designing sustainable, market-led agricultural initiatives.  CNFA builds strong local and global partnerships, incorporates innovative approaches in its programs, and fosters inclusive development to offer enhanced opportunities to under-served groups.  Since 1985, CNFA has managed more than $600 million in donor-funded agriculture development programs and has worked in 43 countries across the world in Africa, Eastern Europe, Latina America and the Caribbean, the Middle East, and South and Central Asia.

A full house at the fair, which featured grantees from the USAID Restoring Efficiency to Agriculture Production (REAP) Project. Attendees had a chance to sample some of their delicious products.

The CNFA conference began with opening remarks from CNFA President and CEO Sylvain Roy, who discussed impacts and job creation in Georgia over the past 10 years.

Former CNFA President and CEO John H. Costello highlighted the incredible strides Georgian farmers and entrepreneurs have made over the past 10 years.

Former USDA Secretary of Agriculture and CNFA Board Member Mike Espy praised the Georgian agro-businesses he saw during his visit.

Former Georgian Minister of Agriculture and CNFA Board Member David Kirvalidze highlighted the importance of entrepreneurship in Georgian agriculture.

Posters highlighted CNFA's impact in Georgia over the past 10 years.

Highlighting the impact of the USAID Restoring Efficiency to Agriculture Production (REAP) Project, currently implemented by CNFA in Georgia.

Highlighting the impact of the USAID John Ogonowski and Doug Bereuter Farmer-to-Farmer Program (F2F), implemented by CNFA from 2008-2013.

Highlighting the impact of the USAID Access to Mechanization Project (AMP), implemented by CNFA from 2009-2012.

Highlighting the impact of the Millennium Challenge Corporation Agribusiness Development Activity (ADA), implemented by CNFA from 2006-2010.

Highlighting the impact of the USAID Georgia Agricultural Risk Reduction Program (GARRP), implemented by CNFA from 2008-2009.